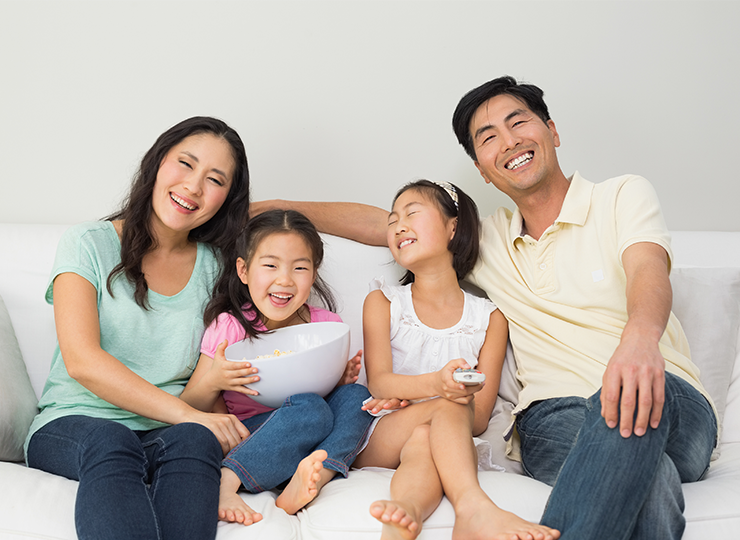 Turn binge-watching into family time with these series on Netflix that are suitable for all ages.
The weekend is here and one way to bond with your family is by binge-watching series currently streaming on Netflix. When you’ve gathered all the family, chances are there’ll be the young and the not-so-young, all mixed in.
While Netflix offers a huge variety of popular titles, it’s a total trek to trawl through them all to find one that’s not only appropriate for every age group but also actually enjoyable and entertaining for each family member as well. Which is why we’ve narrowed them down to not one, but four popular series — both new and returning favourites — that you can watch with your whole family.

Spook up the school holidays with this story of a bumbling young girl trying to scrape through her magical education.
What is it: Netflix’s ambitious re-imagining of the hugely popular Jill Murphy books, is the fifth adaptation of the series. The Worst Witch often gets compared to Harry Potter due to its magical themes. It’s actually a book series written by English author Jill Murphy and first published in 1974 — more than two decades before J.K. Rowling published “Harry Potter and the Sorcerer's Stone”. It’s the story of Mildred Hubble, a clumsy but well-meaning witch in training played by Bella Ramsey, a talented teen actress also known for playing Layana Stark in Game of Thrones.
In the first episode, we are introduced to Mildred, who has no idea about witches and magic, until Maud Spellbody, a mischievous prankster crashes on her flat’s balcony on a flying broomstick. Maud is convinced Mildred has magic in her ancestry, and coaxes her into trying for a spot at Miss Cackle's Academy for Witches. Mildred often feels out of place at Cackle's, but always has the support of her mother, Maud, Enid Nightshade — a mischievous prankster, and Miss Cackle.
Downton Abbey’s Raquel Cassidy makes for a particularly sarcastic Mistress Hardbroom — the terrifying and extremely strict form-mistress of Mildred, Maud and Enid. But The Worst Witch is, essentially, a story that explores the struggles of living with imposter syndrome — because she's the only student from a non-witch family — and the overcoming of it with the help of supportive friends.
Why your family should watch it: This fun and engaging series follows the adventures of a group of young girls attending a magical boarding school. The school lessons are challenging and often result in some humorous and colourful results — for example, in “Pond Life”, the fifth episode of the first season, Mildred is asked to demonstrate a transformation spell by turning a mouse into a frog, but she hits Ethel instead, turning her into a pig. Miss Hardbroom appears and orders Mildred to turn Ethel back, which Mildred does, but Ethel is stuck with a pig's nose. However, it's the girls' friendships, mischievous endeavors and multifaceted characters  that are central to the show. The eccentric faculty also creates some interesting drama.
Its themes of loyalty, bravery and friendship are universal themes and ones that everyone can relate to. It has to be said that it’s refreshing to see a children’s TV show where 99 per cent of the cast are girls and women who don’t sit around talking about the opposite sex. Other than the girls, the teachers and parents also have their own storylines, and in the second season, another set of younger students get their limelight. This intergenerational storytelling is sure to get the entire family hooked!

Jeopardy! is fun to watch because it’s a game show you feel like you can play and win.
What is it: With over 8,000 episodes aired, Jeopardy! is America's longest-running quiz show (since 1964), and is still recording new episodes. Alex Trebek, now 79, started hosting episodes in 1984, and has no plans to retire from his position. Each episode has three contestants who are given clues about general knowledge. The game is played in a reversed format in which an answer tagged to a prize amount is given, and the said prize money is won by correctly phrasing the question. For example, if a contestant were to select “Body Language for $400”, the resulting clue could be “You’ve got to hand it to this tropical tree”, to which the correct response would be “What’s a palm?” The first player to ring-in with the correct answer wins the prize, but if the answer is wrong, the Jeopardy! is realised —  the same value will be deducted from that player’s score and the other players have the opportunity to ring in and respond.
Netflix currently has three Jeopardy! collections available, including the heartwarming “Celebrate Alex” episodes where Trebek treks to museums, exotic locales and historic sites all over the world to dish out unique questions. The other two collections are: the “Seth Wilson Collection”, which celebrates the 12-game winning streak of a doctoral candidate in theatre and film studies — the fifth longest since Jeopardy! allowed endless streaks in 2003, and the “Cindy Stowell Collection”, which honours the science content developer’s amazing win while battling cancer.
Why your family should watch it: People watch Jeopardy! for many reasons — they enjoy the humour, competition, and through this immersively entertaining format, they learn things. At least part of the fun for many of us, though, is the sense that we can “play along” with the contestants on TV by seeing how quickly we can think of the correct answers. This sort of active watching is exactly what we need to keep everyone mentally stimulated while binge-watching TV.
Get inspired by the game’s players, all of whom show determination, dedication, and skill. Apart from that, many of the skills required to win in Jeopardy! — general knowledge, the ability to think quickly, analytically, and divergently — have clear relevance for us all. Answers presented as bite-sized pieces of knowledge are a great way for you and the kids to learn about pop-culture, nature, geography, food, science, literature, animals and so much more!
If you want to immerse yourself further, play Jeopardy! online here. Connect your laptop to your TV and turn your living room into a make-believe Jeopardy! set, and get the family involved. You can either sign in with your myJeopardy! account or choose to play as a guest. You’ll be tested on six categories and get five seconds to solve it.

If you want a dramatic, intriguing show that will also bring a smile to your face, look no further.
What is it: Lemony Snicket’s A Series of Unfortunate Events, is adapted from the book series of the same name, in which a nefarious character named Count Olaf tries to steal the fortune of three orphans (the Baudelaires): Violet, the eldest,  is an intelligent inventor;  Klaus, the middle child, is an excellent researcher, and lastly, Sunny, is a sassy toddler who doesn't talk in any language most people can understand, yet gets all the best lines (her gibberish is translated and communicated through subtitles) in the show. Throughout the series, Count Olaf adopts a plethora of ridiculous disguises — which somehow, without fail, fool the adults taking care of the children, leaving the Baudelaires to rid themselves of Count Olaf while attempting to uncover enigmatic family secrets.
For fans of the books, Season One of the Netflix-adaptation covers the first four books: “The Bad Beginning”, “The Reptile Room”, “The Wide Window”, and “The Miserable Mill”. Season Two covers the next five books in the series: “The Austere Academy”, “The Ersatz Elevator”, “The Vile Village”, “The Hostile Hospital” and “The Carnivorous Carnival”. The final books are covered in Season Three: “The Slippery Slope”, “The Grim Grotto”, “The Penultimate Peril” and “The End”.
Why your family should watch it: The CGI-enhanced physical sets for places like the Lucky Smells Lumber Mill or Uncle Monty’s Reptile Room work well, where the computer-added flourishes help turn the real-world settings into spectacular and fantastic locations. Gothic sets like creaky mansions and lush mazes make watching Count Olaf’s chase of the Baudelaires a visual treat for both adults and children.
The show is intentionally educational in its teaching of vocabulary, where definitions of advanced vocabulary used are accompanied by the familiar refrain, "a word which here means..." Moreover, the show’s grammatical jokes, consisting of a variety of literary references and mile-a-minute dialogues filled with wordplay, encourages your young child’s developing sense of humour. The complex storytelling also puts their sequencing skills to test as they work to understand the cause-and-effect relationships by logically ordering events, images, intentions, and action. The series is also whimsical enough to entertain the older kids, while grown-ups are sure to appreciate the show's dry humour as well as intricate and mysterious subplots.

Nailed It! teaches us that our actions don’t always have to lead to perfect outcomes.
What is it: Nailed It! is a half-hour, competitive cake-making reality show featuring amateur bakers. The show features two resident judges — comedian Nicole Byer (who is dazzlingly charismatic) and French chocolatier Jacques Torres (who hoots with laughter, cringes in despair, and occasionally steps in to offer a little guidance) as well as a guest judge. With Byer’s witty banter and Torres’ expert knowledge, the show becomes a way for viewers to gain baking tips while enjoying a laugh or two. Byer, for example, can transform dull moments into entertainment and has the most contagious laugh that will cause you to burst into a fit of laughter.
The format of the show is simple: In each episode, three contestants are given two challenges. The first is “Baker’s Choice,” where they must choose a small treat to recreate. The winner of the challenge wins a special prize and is given the golden baker’s hat to wear for the next challenge. The second challenge, “Nail It or Fail It,” is the most crucial as competitors only have two hours to recreate an elaborate cake along with several decorations. For added fun, the bakers have panic buttons, which award them three minutes of one-on-one coaching from either Torres or the guest judge. The winner of the second challenge wins the $10,000 prize money.
Why your family should watch it: The show’s main draw is watching contestants hilariously struggle in their attempt  to re-create say, a towering layer cake resembling a long-hair princess in a teetering tower, adorned with fondant and heart-shaped chocolates, throwing their hands in the air, and sharing their truly epic fail with the world.
The mood is light, the judges are charming, and it encourages the view to think, “Look at those home bakers trying to pull something off. Maybe I’ll try to do some baking of my own!”. The show’s gentle combination of wholesomeness and sly subversion has catapulted it to phenomenal international success. Nailed It! has emerged as one of the sweetest, most supportive, silliest ways to entertain yourself and your family, while also maybe learning one or two things about baking. It is a joyous testament to the power of laughing with, instead of laughing at.
Back

Seize Mega May Rewards on Frasers eStore! Bag $60!
in Promotions
Saturday Mall Workout by Health Promotion Board
in Events