We’re whizzing into the hottest action-flick season, so get ready for a hero invasion on the big screens! From now till December, mark your calendars and book your best movie kakis for some film action (or two). Here’s a list of what you shouldn’t miss in the cinemas!

Action movies come in all sizes, as long as they’re well-pieced together like a LEGO set and, erm, movie. The LEGO Ninjago Movie is a hilarious and heart-warming one filled with lots of ninja action. Just watch out for the legendary Jackie Chan, who lends his voice as Sensei Wu, and an all-star cast including Olivia Munn, Dave Franco, Michael PeÃ±a, Fred Armisen and Justin Theroux.

Who doesn’t love Thor? Marvel’s hammer slinging superhunk â€“ we mean, superhero, will hit the screens at the end of the year, but you can start feasting your eyes on this nail-biter of a trailer. The drool-worthy Chris Hemsworth is back as Thor, joined by A-listers Cate Blanchett as Hela and Jeff Goldblum as The Grandmaster. Expect action with a sense of humour, and a Hulk that’s all armoured up and tougher than ever.

Hang on tight to your seats for the ultimate superhero movie: five superheroes from DC Comics team up to save the world from a newly awakened enemy. Batman enlists the help of Wonder Woman and friends, and an epic clash between good and evil ensues. Starring: Ben Affleck as Batman, Jason Momoa as Aquaman, Ezra Miller as The Flash, Gal Gadot as Wonder Woman, and Ray Fisher as Cyborg.

The moment a Star Wars film goes public, it’s spoiler mania â€“ imagine having to cover your eyes and ears to block out critical plot points every time you’re at a gathering or scrolling through your Facebook feed.

Don’t be a spoiler victim this year. Be the first to catch Star Wars: The Last Jedi, the next chapter in the Skywalker family saga. You probably can’t wait till December to find out if it’s really time for the Jedi to end, but Yoda will tell you that "Patientâ€¦ you must be."

So go ahead and mark those release dates, and go forth with much force!

Catch all the action

For super fans, the superhero action never really ends, even after the credits roll. So be sure to update your figurine collection from TOG - Toy Or Game (Causeway Point and Waterway Point) or Play-E (Northpoint City and Waterway Point). 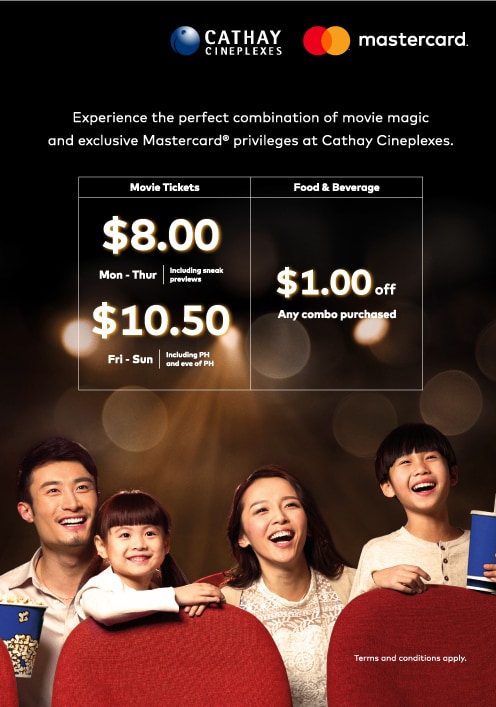 Student tickets are exclusively priced at $7 for 2D movies screened on weekdays before 6pm.

Senior citizens (aged 55 and above) are eligible for tickets priced at $5 for movies screened on weekdays before 6pm.

MovieMax members can enjoy exclusive ticket prices for 2D and 3D movies daily. This promotion is only available at Waterway Point and other selected theatres.